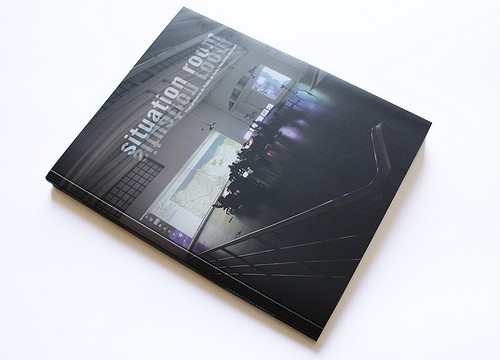 A new iconography to identify power came into being in the 1950s. Darkened rooms sealed off to the outside world, full of screens showing all kinds of data, inhabited by analysts who filtered and interpreted the incoming stream of information in real time. A huge map of the world full of blinking lights almost always dominated the scene. These were the new “control rooms” or “situation rooms”. The Situation Rooms that began appearing after the second world war –the first conflict in which data interception became a key battlefront– have now become the command bridges for military, economic and political structures.

Situation Room set up a situation room for civil society at LABoral Art and Industrial Creation Centre in Gijón. The installation includes the full array of props pertaining to this form of architecture –computers at a huge circular table, projections, control panels– and systems designed to monitor a specific territory and its situation in the global context.