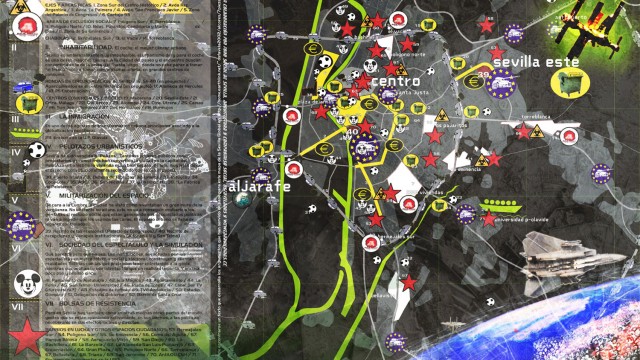 In Seville, on the eve of a large EU summit and concomitant protests in 2002, a collaborative mapping project was carried out with different community organizations to try to represent different effects of globalization on the city. The project drew on Zapatista frameworks of understanding, particularly those from the communiqués on “Seven Loose Pieces of the Global Jigsaw Puzzle” (Marcos 1997) and the “Fourth World War” (Marcos 2001). In this case, the map is part of a broader collective project of revisioning the city, a project that lasted much longer than the action itself.

This early mapping projects resembled street maps, although our goal was to chart the diversity of protest actions and events at one of the large anti-globalization protests. Individual groups could plot their different actions on a larger master copy and it could be used as an infopoint at a protest convergence center or reprinted for handheld use. From these efforts at showing where protests were happening, later efforts focused on how to translate discussions of the effects of “globalization” on a city-wide scale.