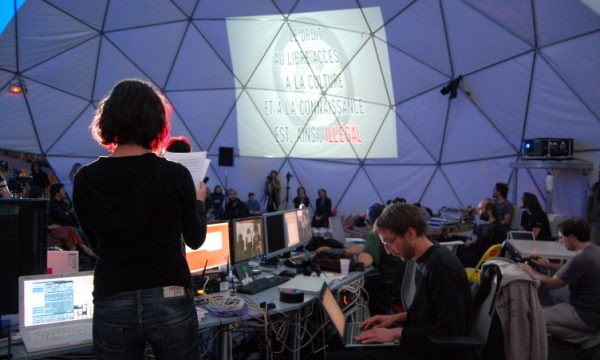 WikiPlaza was an experimental, long-term project that brought together several collectives of architects, hackers and activists. The idea sprung up of generating a hybrid public space in which to experiment with information and communication technologies as tools for individual and communal emancipation, based on free software and hardware, web 2.0 tools and an open and transparent use of spaces and systems.

Beginning with a generic discussion of new freedoms in the global metropolis —mobility, flexibility, cyborg transformations, ecology and participation — WikiPlaza Paris project consisted of a series of diagrams that proposed turning the place de la Bastille into a citizenship laboratory in the framework of the network society. Concepts and tools drawn from digital networks —especially from the communities of free software— were applied to the social construction of an open and participative public space that would favor use by its inhabitants. The concepts developed therein recombine ideas and practices most of which are already present on the web. The idea is that, in the construction of a permanent institutional space, we can attempt to bring into play the creative and organizational experiences of social movements over the last decade, including indymedia, hackmeetings, Wikipedia, Fadaiat and Mayday, as well as the more commercial ones from the so-called web 2.0, including Google, Blogger, Flickr, Myspace, Facebook and Youtube, to name but a few of the most outstanding. Continually redrawn from the first stages of work, the conceptual diagrams we seek to apply in the wikiplaza are as follows.

Wikiplaza Paris was set up as part of the Festival Future en Seine. Festival de la Ville Numerique, organised by Paris Cap Digital and curated by Ewen Chardonnet. It operated from 29 May to 7 June, 2009. The project was a co-production between the Cap Digital team, hackitectura.net and the Labomedia, directed by Sergio Moreno from hackitectura.net and Laura Hernández Andrade. It involved a production team of approximately 30 people.
The WikiPlaza has located in Place de la Bastille, one of the emblematic sites in the French capital, and functioned as the main hub of the festival. The architecture was developed by Straddle3 and Hackitectura, and consisted of a geodesic dome with a 15 meter diameter and a height of 7.5 meters, offering a covered area of some 180 square meters. To complement it, we designed a demountable platform based on the Layher system but adapted to the geometry of the prototype, which had to include an access ramp, a bicycle parking area, a ‘quarterpipe’ for skaters and stepped seating, all designed to enhance its integration with the everyday use of the public square. This base also allowed us to counterweigh the structure given that there was an express ban on drilling into the paving in the square. This was done using a sophisticated system of cabling and counterweights beneath the platform. The base and dome were complemented by the Mille Plateaux furniture element designed and digitally fabricated.