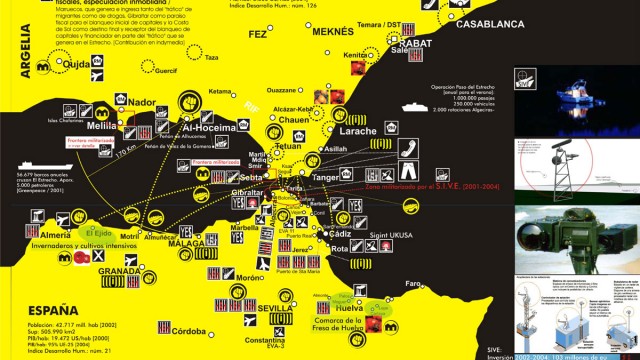 Critical cartography of the Straits of Gibraltar

Hackitectura’s map Cartografía Crítica del Estrecho (Cartography of the Straits of Gibraltar) creates an alternative understanding of the Spanish-Moroccan border region. The border is not an abstract geopolitical line but an increasingly complicated, contested space. The inversely oriented (north at the bottom) map highlights connections between southern Spain and northern Morocco to show a single region. A multitude of migrants enters Europe in flows, past motion sensors, semi-military repression and expulsion. The idea of the map is to follow the flows that already traverse the border, such as migrants, Internet data and cell phone calls, as well as capital and police. The flows reshape the very border into a border region. In this mapping project, Hackitectura and their collaborators map the border region to contest and transcend it.